It’s been a while since I’ve posted an update on my progress with Avon. In just six short months, I am proud to say that I am #1 in my district for new recruits, #10 in sales (competing with ladies that have been selling for over 25 years and in the prestigious President’s Club), #1 in sales for those whom have yet to reach President’s Club (sell at least $10k annually), and in Campaign 9, I became Gold Ambassador! Currently, my team averages about $6,600 in sales every two weeks (campaign). As of today, our highest campaign was $7,433! I am now mentoring another leader and I’m so excited and proud of her. She has the drive and fire in her belly that really makes me enjoy working with her. It’s nothing like being someone’s boss. We’re business partners. We work together and speak on a regular basis. I have really fallen in love with having business partners and not employees. It’s so much better than corporate! I’m working with like-minded women and men to accomplish all of our goals.

Back to my newest leadership representative: she joined Avon in Campaign 11 (we’re now in Campaign 15) and already she has become an Ambassador! That’s right, in just two short months, she has recruited 12 new representatives and her team reached $1K in sales in the 2-week campaign (Campaign 14). As a result, she’ll receive bonus for reaching Ambassador ($100), bonus for maintaining Ambassador ($300) and up to $65 per new recruit PLUS commission from her personal sales AND commission on her team sales BUT it gets better as she continues to build her business! Who ever said there was no money in Avon? Yea, right!

In six months, I have “promoted” 5 times! What person working a 9-to-5 can say that? I became Promoter, Star Promoter (skipped level), Ambassador, Silver Ambassador (skipped level) and now Gold Ambassador! This all happened from Campaign 5 to Campaign 9 (two months). I’ve promoted myself 5 times in two months! As I write this blog, I just realized how fast I’ve moved and I control the pace! What other job can say that?!?!? I love that I have the ability to control my own destiny. I work hard and I see the rewards.

I am now on my journey in the Advanced Leadership Program to become “Leader” meaning my team sells $8k every two weeks and my business partner titles as Silver Ambassador. I’m so close and it feels so awesome! I never would have thought all of this would be possible in just 6 short months.

To date, my team — Team Believers— has sold $36,088 in products! We are doing such a great job and I truly love all of the praise and recognition that I’ve received. On June 24, 2016, Avon noted me in the Grow to Win webinar for being in the top 18 recruiters NATIONWIDE!!!!

And just in: our team finished in #1 spot for our bracket for Campaign 14! I’m so proud!!! The good news just keeps pouring in!!! Don’t believe me? The proof is below! I’ve taken out representatives’ names as a respect for their privacy. Now of course, all of this comes with financial rewards which I am not ashamed to show. Previously, I showed my very own bank statement and trust, the funds are growing rapidly. 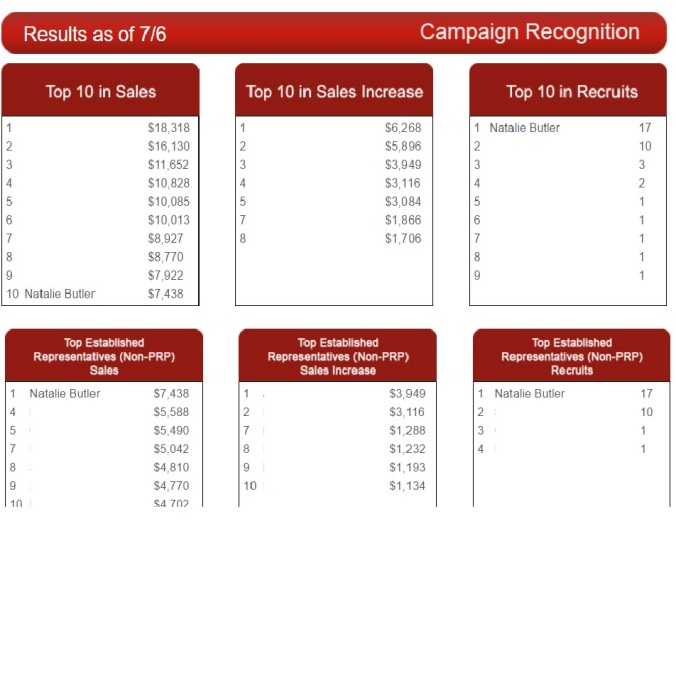